Following the demolition of the wall separating the kitchen and little den, Jim’s next project was to move the refrigerator. Here’s an old picture of the fridge location from the day we first toured the house.

Jim, our agent Cathy and I all three had the same impression – “Why is the refrigerator in the family room??” We always knew that if we got the house, the fridge would have to move down toward the kitchen.

Once all those things were done, Jim was ready to tackle moving the fridge. He had to relocate an existing junction box to create a new outlet. The big challenge was putting in a water supply line. Jim decided to run a copper pipe from the new location up through the ceiling, across the top of the door, down the wall behind some kitchen cabinets, and then tap into the water supply for the ice maker.

Piece of cake. Especially when Jim figures out how to do it, not me 🙂 First Jim ran the line up the wall and over the door. Then he had to take down the upper cabinet over the ice maker. 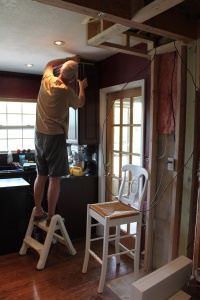 Next he pulled out the ice maker so that he would be able to tap into the water supply. 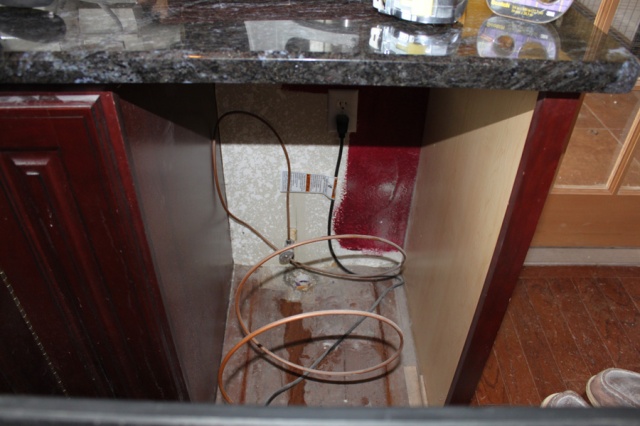 With the upper cabinet down, he was able to cut a hole in the drywall and fish the pipe out of the ceiling.

Now, in a perfect world, he would have just been able to snake the copper pipe down behind the drywall, and come out at the icemaker water supply. However, there were several horizontal wood braces installed between the studs which were blocking the way. I’m assuming they were there to have something to attach the upper cabinets to…Jim claims they were there just to piss him off.

Now he had to cut more drywall away to get to the horizontal braces, so that he could drill holes in them to thread the copper pipe through.

In my true ADD form, I apparently ignored getting pictures of the rest of the process! You’ll just have to take my word that he successfully got the copper line all the way down the wall, and tapped into the icemaker supply line!

He also built a soffit above the new fridge location. This was harder than the average soffit. First of all, it straddled the new kitchen beam. On the left side, he had to adjust the soffit for an uneven kitchen ceiling that he will replace in the future. On the right side, the top of the soffit met a sloped ceiling. In true structural engineering style, Jimbo did an excellent job! He moved the refrigerator into place. In the photo below, you can see the old location vs. the new location.

It was just a move of a few feet, but it makes all the difference in the world – now our refrigerator is truly in the kitchen!

I'm a wife, a mom to an unschooling teenager, an animal lover, an artsy craftsy kind of person, & a DIYer. We're embarking on our BIGGEST do-it-yourself project yet - renovating an entire house!
View all posts by donnahuebsch →
This entry was posted in DIY, Renovation and tagged copper pipe, move refrigerator, soffit, tap into water supply. Bookmark the permalink.