Posted on February 8, 2014 by donnahuebsch

My name is Donna and I’m a recycling nerd. How do I know this? Because I got insanely, freakishly excited when our new mixed recycling container showed up in our driveway recently.

It was shiny and blue and brand spanking new. I loved it! 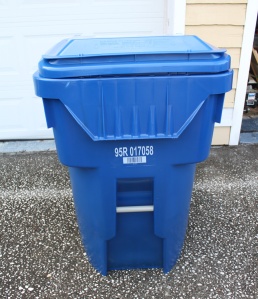 To at least partly understand my excitement, you have to know what our old recycling was like. We have had two blue bins in the garage, one for paper and one for plastic bottles with necks. The City of Largo would pick these up curbside one day a week. If you had any cardboard, you needed to flatten it into pieces no larger than 2’x2′ and put it under one of the bins.

We had been discussing how to build in a 3-bin recycling shelf into the next set of shelves that Jim will make for the pantry. Now, with mixed recyclables, everything can be dumped into one bin in the pantry.

When that’s full, we can take it out and dump it into the big blue bin, which will be rolled out to the curb once a week.

I. LOVE. IT. This makes recycling so much simpler for us. Not only that, but the City of Largo has expanded the different types of items you can recycle.

I was so excited that I had to take a picture of the contents of our bin the first time we rolled it out to the curb last week.

Yes, as I said, I’m a recycling nerd. I even had to run look when I heard the recycling truck coming down our street. It has a cool gizmo on the side which reaches out, grabs the big bin, lifts it up and dumps the contents into the truck. Very neat.

I’ve been slacking off on posting about the pantry shelves…I’ll try to get some pictures up soon. Jim’s done some nice work and we’re already putting it to use!

I'm a wife, a mom to an unschooling teenager, an animal lover, an artsy craftsy kind of person, & a DIYer. We're embarking on our BIGGEST do-it-yourself project yet - renovating an entire house!
View all posts by donnahuebsch →
This entry was posted in DIY, Renovation and tagged mixed recycling, recycling, recycling bin in pantry, recycling bins. Bookmark the permalink.